Sean Covey is the President of FranklinCovey Education and has led the development of many FranklinCovey’s organizational offerings, including: FOCUS, Leadership, The 4 Disciplines of Execution, The Leader in Me, and The 7 Habits of Highly Effective People. Sean oversees all of FranklinCovey’s international partnerships, which cover more than 140 countries.

Sean is also FranklinCovey’s Education Practice Leader and is devoted to transforming education around the globe through bringing leadership principles and skills to students, educators, administrators, and parents alike.

He is a New York Times bestselling author and has written several books, including The 6 Most Important Decisions You’ll Ever Make, The 7 Habits of Happy Kids, and The 7 Habits of Highly Effective Teens, which has been translated into 20 languages and sold over 4 million copies worldwide.

He is a seasoned speaker to kids, teens, and adults and has appeared on numerous radio and TV shows.

Sean graduated with honors from BYU with a bachelor’s degree in English and earned his MBA from Harvard Business School. As the starting quarterback for BYU, he led his team to two bowl games and was twice selected as the ESPN Most Valuable Player of the Game.

Sean Covey is Executive Vice President of Global Solutions and Partnerships for FranklinCovey. Sean has led the development of most of FranklinCovey’s organizational offerings, including Focus, Leadership, The 4 Disciplines of Execution, The Leader in Me, and The 7 Habits of Highly Effective People. Sean oversees all of Franklin Covey’s International partnerships which cover over 140 countries.

“Remember, life is a mission, not a career. A career is a profession. A mission is a cause. A career asks, “What’s in it for me?” A mission asks, “How can I make a difference?”

The 4 Disciplines of Execution: Achieving Your Wildly Important Goals

An insightful new book from the multimillion-copy bestselling author Sean Covey, Chris McChesney, Jim Huling and the FranklinCovey organization based on their work with hundreds of thousands of employees and large companies to unveil the essential disciplines proven to help businesses and individuals realize their most important goals.

Do you remember the last major initiative you watched die in your organization? Did it go down with a loud crash? Or was it slowly and quietly suffocated by other competing priorities?

By the time it finally disappeared, it’s likely no one even noticed.

What happened? The “whirlwind” of urgent activity required to keep things running day-to-day devoured all the time and energy you needed to invest in executing your strategy for tomorrow! The 4 Disciplines of Execution can change all that forever. 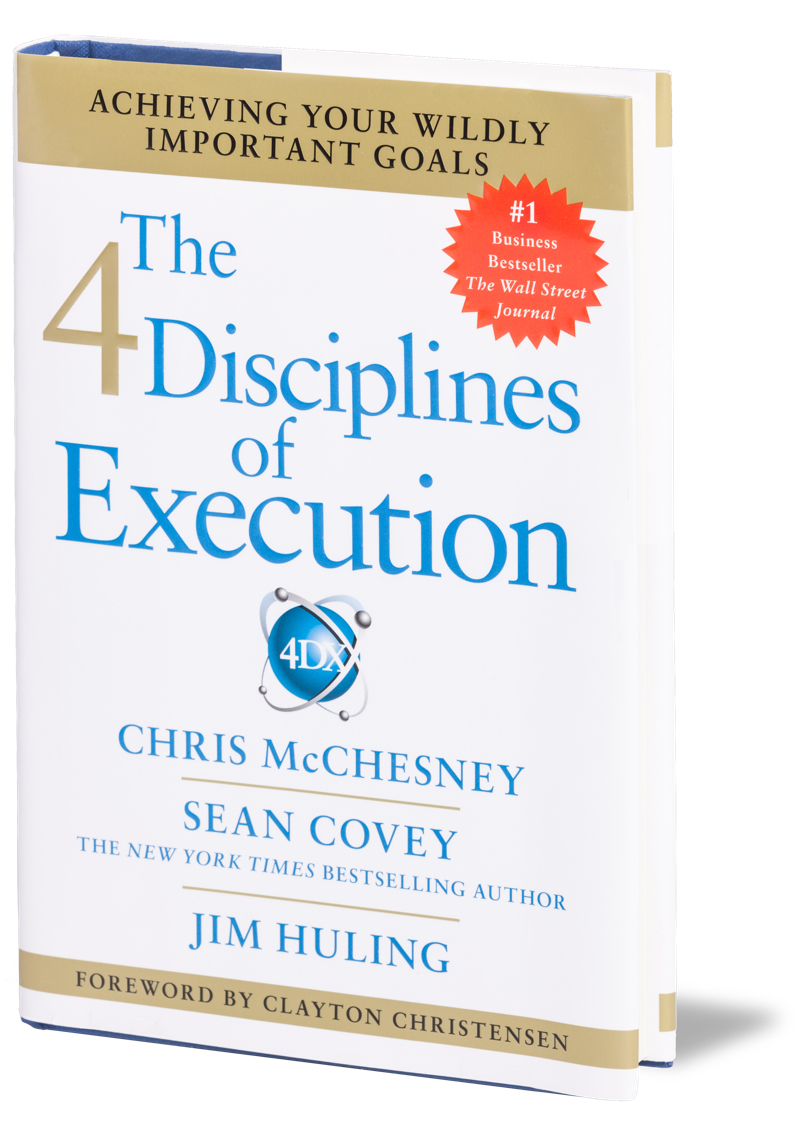 We use cookies on our website to give you the most relevant experience by remembering your preferences and repeat visits. By clicking “Accept All”, you consent to the use of ALL the cookies. However, you may visit "Cookie Settings" to provide a controlled consent.
Cookie SettingsAccept All
Manage consent

This website uses cookies to improve your experience while you navigate through the website. Out of these, the cookies that are categorized as necessary are stored on your browser as they are essential for the working of basic functionalities of the website. We also use third-party cookies that help us analyze and understand how you use this website. These cookies will be stored in your browser only with your consent. You also have the option to opt-out of these cookies. But opting out of some of these cookies may affect your browsing experience.
Necessary Always Enabled
Necessary cookies are absolutely essential for the website to function properly. These cookies ensure basic functionalities and security features of the website, anonymously.
Functional
Functional cookies help to perform certain functionalities like sharing the content of the website on social media platforms, collect feedbacks, and other third-party features.
Performance
Performance cookies are used to understand and analyze the key performance indexes of the website which helps in delivering a better user experience for the visitors.
Analytics
Analytical cookies are used to understand how visitors interact with the website. These cookies help provide information on metrics the number of visitors, bounce rate, traffic source, etc.
Advertisement
Advertisement cookies are used to provide visitors with relevant ads and marketing campaigns. These cookies track visitors across websites and collect information to provide customized ads.
Others
Other uncategorized cookies are those that are being analyzed and have not been classified into a category as yet.
SAVE & ACCEPT

Thank You For Your Submission!

Our Customer Service Team will be contacting you shortly.